The GrainFather: I Tried To Break It. And It Won. 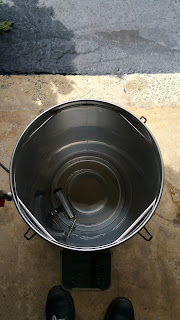 By now you've probably heard about the New Zealand Miracle known as The GrainFather. You may even have considered buying one but hesitated without knowing more. Maybe like me you thought to yourself "surely it..." (<-- this is where you insert your concern and I try to answer it). So what better way to find out than to buy one and burn it in? Yup, I'm brewing and phlogging about it here (photo-logging get it? Yes, I know it's not a real term). Today we are brewing up a tasty American Wheat Ale I call GumbyFace: 5.5% ABV, about 30 IBUs, nice and crisp with a bit o' hop goodness.

The Guts
This is what the GrainFather looks like from the inside. The easy to clean filter tube keeps large solids out of the pump and the thermowell provides data to the controller. Notice the wire ledge just inside the lip at the top of the unit which securely holds the grain basket in place during sparging.

Today I am brewing with 10-1/4 pounds of grain so the GrainFather hot liquor formula calculates 4.385 gallons of water for the unit. My water is currently 80F and my mash-in target is 154F.

I usually brew with hop pellets but I'll be using whole cone Amarillo for this beer so as not to clog the filter. If you want to use pellets I would suggest bagging them. The holes in the tube are of a decent size but flow could be restricted at a minimum, blocked at the worst. 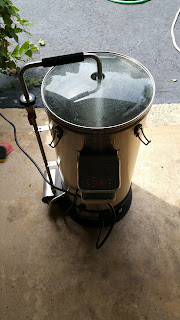 Prepping Strike Water
The directions tell you to heat water with the 600W Mash function for hands-off control but this is a slow way to pre-heat the water, and the unit itself.

Pro-Tip: Switch to Boil and monitor the temperature gain instead, cutting back just before you hit your target. I also put the cover on to contain the heat, and start the pump recirculating to distribute the heat. 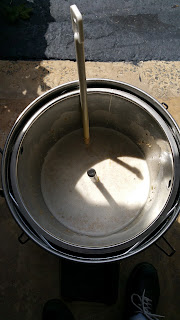 On To The Mash
The unit was filled with water at 12 noon and at 12:36 I am already at 154F. Normally I shoot for 10 degrees higher and let the grain bed come down to temp but today I'm interested in testing how fast the GrainFather ramps up. Pump off, switch set to Mash per the directions, now time to add grain.

Here you can see I've inserted the grain basket into the mash tun. Assembling it was mildly frustrating due to wiper seals wanting to roll off the screens but after a brew length or two that should be alleviated.

Adding grain is easy. The higher than normal volume of water means very little likelihood of dough balls -- pretty much just dump and stir. I can see the room temp grain has brought the mash down to 147F but the controller is ramping up quickly. 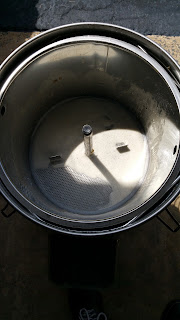 With the mash now set I insert the upper screen, cover the unit, attach the recirculation pipe and restart the pump. The pump flow rate is good and the motor is nice and quite.

During the course of the mash I observe the heat fluctuating from a low of 152 to a high of 155F but for the most part it stays at 154F. This isn't unusual as fluid from different parts of the mash moves through the unit and eventually stabilizes.


Pump It Up!
This is what the mash looks like a few minutes into recirculation and it smells great. The directions call for an hour long mash cycle but I've brewed on several Recirculating Infusion Mash Systems (RIMS) and know they tend to convert grain to extract more quickly. I will evaluate color, clarity, and gravity midway through and adjust timing from there. This is where a refractometer comes in handy. 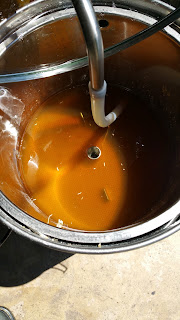 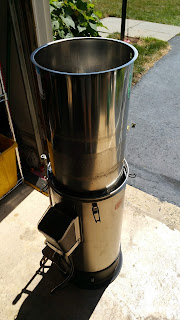 This is the mash at 30 minutes. Conversion is progressing nicely and the wort is clearing well. At this point I've decided to limit the mash cycle to a total of 45 minutes. In theory I may be sacrificing a little gravity potential but the extract is already very sweet and I doubt there is much to be gained from mashing longer.

With the controller set to mash-out the unit reaches 168F quickly. Here again the GrainFather fluctuates between 165 and 168F but it does stabilize and I run the pump for 10 minutes. It's now 2 PM and I'm making good time. Better than expected, as a matter of fact.

Although mash-out is sometimes considered optional it's something I practice. It only takes 10 to 15 extra minutes and it makes the sparge more efficient in my opinion.


Old Skool Sparging
Sparging at this point is very simple. The GrainFather comes with a handle that lets you easily hoist the grain basket up and onto that wire ledge.

Their sparge water formula calls for 3.29 gallons of water at 167F although I prefer (and used) 172F water.

Pro-Tip: Save time by setting the heater to Boil as soon as the grain is out of the tun to get the wort to boiling more quickly.

As of this writing the company behind the GrainFather is not yet exporting a separate water heater so I used my regular kettle, propane burner and a measuring cup to pour over with. Not a big deal but something to plan around.


But Does It Boil?
If you were worried about the GrainFather's ability to boil, don't be. It performed better than expected as you can see here. In fact, the slightly lessened boil strength -- as compared to propane or 240V -- means you don't have to worry about a boil-over as much. Another plus.

You only need a boil vigorous enough to drop out excess malt protein and isomerize hop oils. The hot break was roughly equal to what I get with gas. 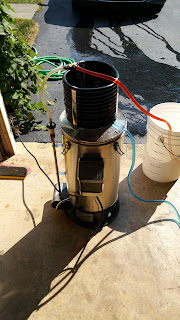 Just Chillin', With A HomeBrew
The Counter Flow chiller is designed to easily connect to the unit and rest on top of it. This is a great idea that helps keep the footprint small and at this height it flows right into your fermenter.

The hot wort is recirculated through the chiller and back into the boiler for 5 minutes or so to sterilize it. Thereafter the flow is diverted and the pump keeps everything moving along nicely.

Although the flow did slow a little toward the end no matter, by then I had already netted my desired 5-1/4 gallons of wort and was dead on my OG of 1.055. As compared to BIAB which is often less efficient in yield, the RIMS function brings it up nicely and I came in at 75%. No special milling or effort on my part needed. In subsequent brews I will adjust pH and can only see that number going up. I did not today in order to set a benchmark to work from going forward. 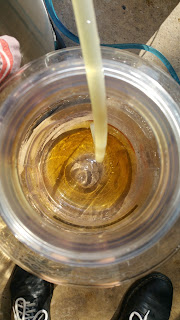 Check out the clarity of the first runnings! This is one of the major benefits of RIMS methodology, the constant recirculation means the cloudy extract is returned to the top of the grain bed where it is filtered over and over and over again. 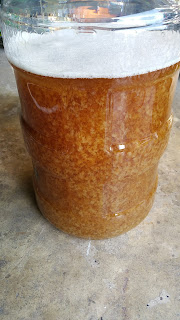 As you can see, the cold break is impressive. The chiller may be compact but it's quite effective. Can't wait for cooler weather to bring down the tap water temp though. Brewing in the Summer is always tough and I was really glad not to be standing over a propane burner today.

Conclusion
I got my GrainFather through Kickstarter in a moment of late night impulse buying and will admit I had a bit of buyer's remorse in the months spent waiting for it to arrive. Little did I know that one of our distributors would later carry it so that we could offer The GrainFather ourselves.

Any hesitation I had early on is gone. I'm pleasantly surprised with the build quality, the thought that went into functionality, and how well it performed today. It's elegant, it's simple, and it does what it does well.

Anyone buying a GrainFather this generation (the second, I believe) may still be an early adopter of sorts but the skeptic in me tried to break it and I'm happy to report I failed. I guess the only questions now are how well GrainFathers hold up over the long run and access to replacement parts when the time comes. No doubt this product is not for everyone at sub $900 but I like mine and I'm happy we can offer them at myLocal HomeBrew Shop. Brew on!