I can't say I've tried everything we carry but that's not for lack of trying! At myLHBS we like to give honest answers to honest questions -- especially with new products -- so today I'm brewing Brewcraft's Boneyard Beer RPM IPA.

The first thing I do before I start brewing is lay everything out and check the contents against the inventory sheet. From left to right: 1. A substantial bag (4.2 pounds) of mixed grain, a blend of base malt and specialty grain from the looks of it. Like most manufacturers Brewcraft includes disposable grain steeping bags although this quantity is better handled by something like this. 2. Light dry malt extract. The inventory list shows four pounds of DME but the second page of the directions says five. Perhaps luckily the Loose Cannon kit we also received has one pound too many so I'll just add that here.

In the background you can also see a pound bag of corn sugar for boosting the fermentables and lowering the final gravity. This makes for a lighter, drier beer that is easier to drink and also brightens up the hop profile. Although the recipe calls for 13.4 oz. I'm going to add the whole thing and skip the leftovers. 3. Hops. And more hops. This recipe relies on modest First Wort and flavor and aroma additions followed by a huge Hop Burst at flame out -- nearly six ounces! This achieves massive hop impact without harshness from long boil times. The last hop addition will be in the form of Dry Hops in the secondary. The inventory sheet says that bag contains just under an ounce of pellets but it feels heavy. My scale weighs it at over two ounces so I'll ask Brewcraft about this discrepancy too. 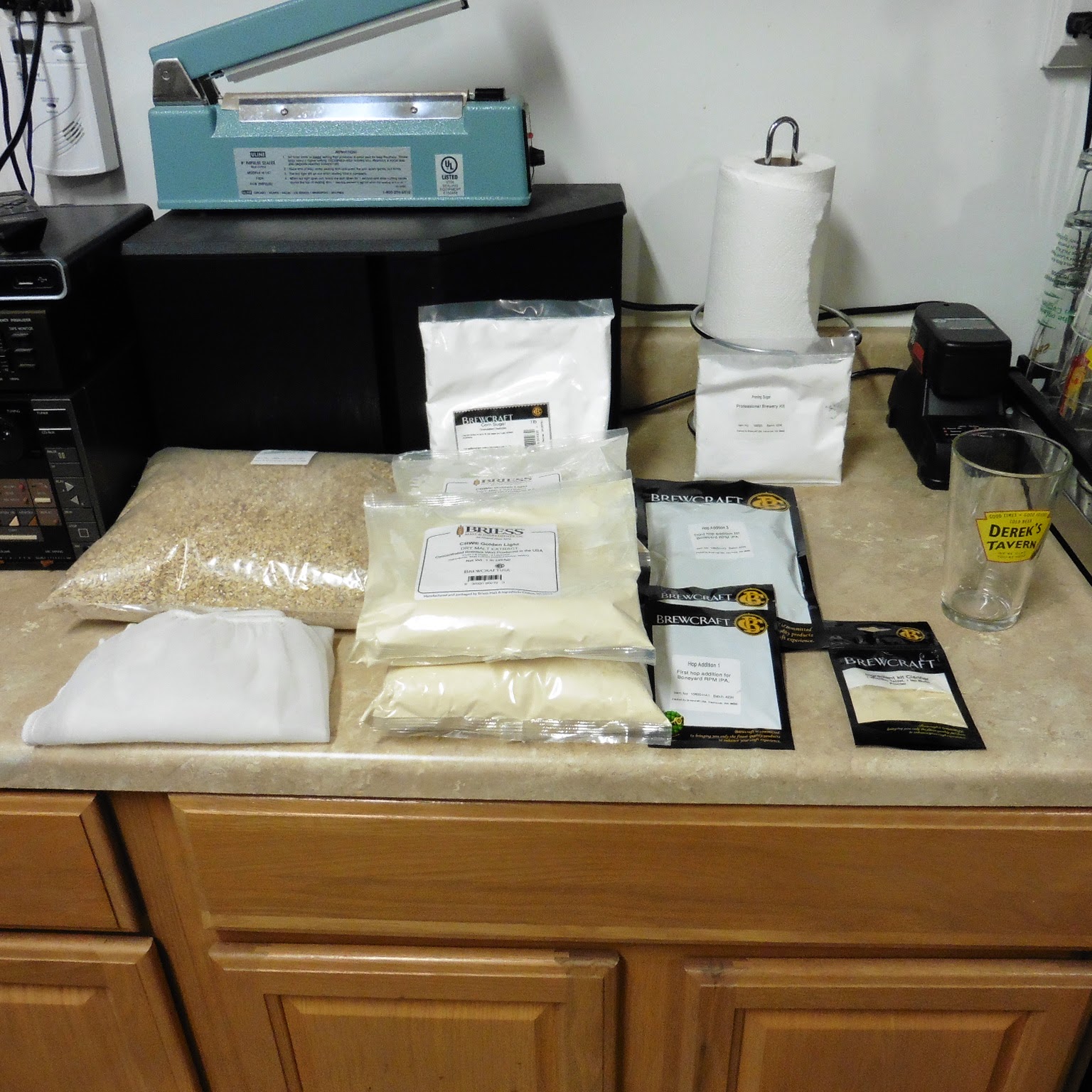 Here's a plus: Whirlfloc and yeast nutrient. Although the recipe OG of 1.062 doesn't really make the supplement necessary I add Wyeast nutrient and Whirlfloc to my boils anyway so this is a nice touch. The kit also includes Nottingham dry ale yeast but the box tells you that Boneyard Beer recommends Wyeast 1968. I like both forms and today I'm keeping it simple with the Notty. 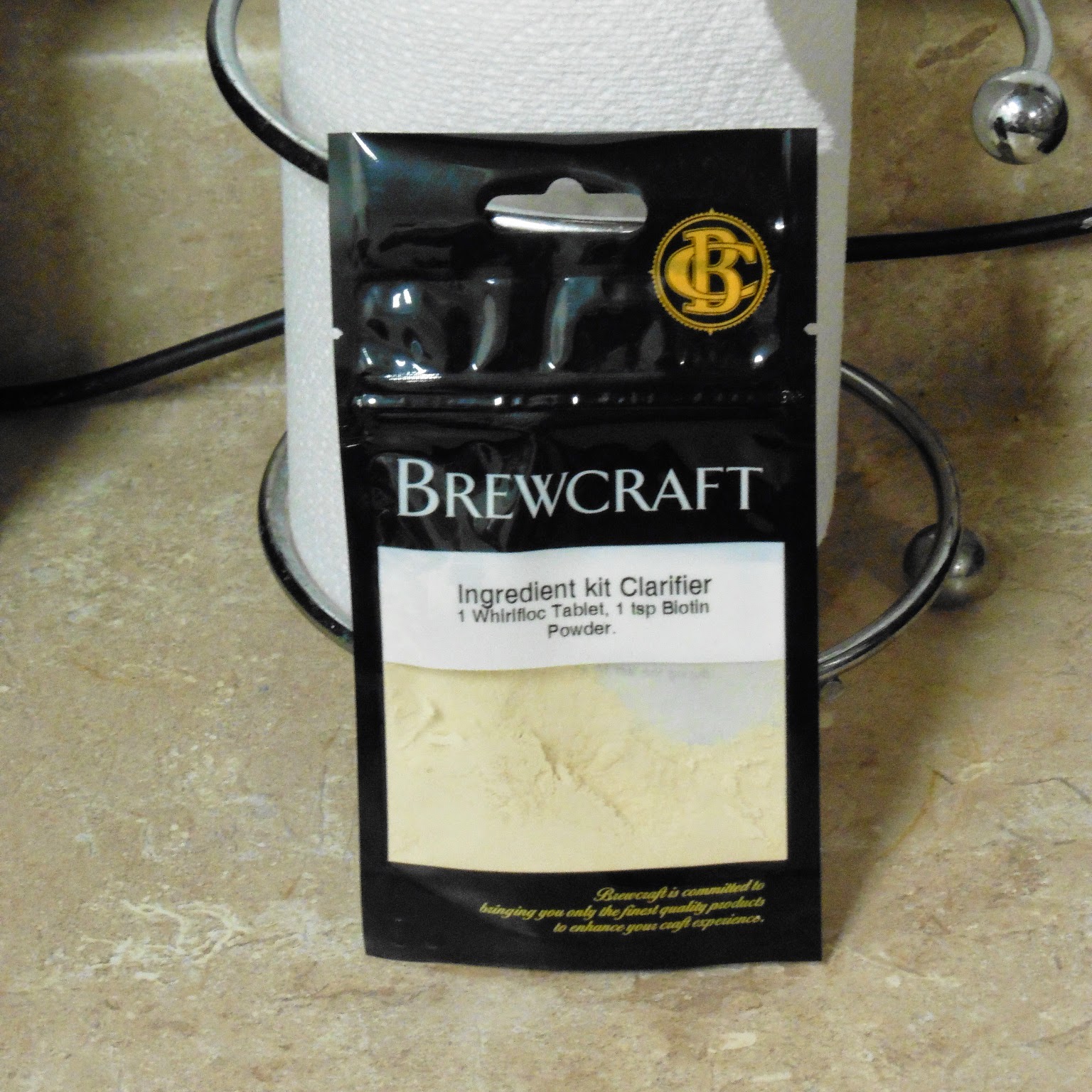 Brewcraft suggests brewing with tap water which I really don't recommend, at least not in this area given the high chlorine content. I use good quality spring or filtered tap water and the copper hook I bent a few years ago makes the process a snap -- I just fill slowly while pre-heating. The instructions call for heating to 151F and steeping the grains for about 30 minutes. Given the temperature drop that happens when cooler grain is added to strike water I always add 5 degrees in the Summer or 10 degrees or so when it's cold out. A starting temp of 160F should be just about right for today. 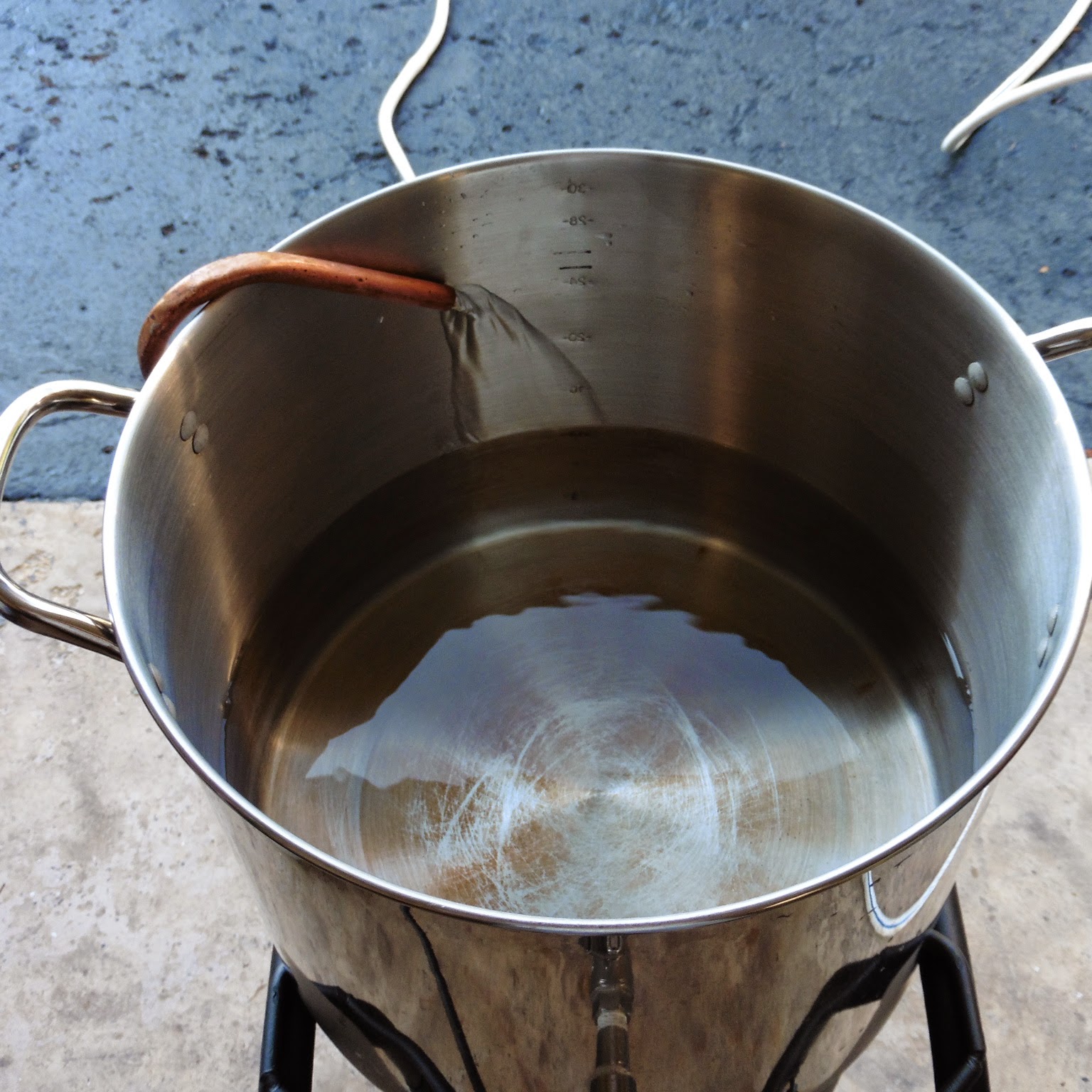 Pro-Tip: Placing your coffee on the kettle lid helps keep heat in the mash and warms your coffee too. This is very helpful when it's 49F outside but I wouldn't do the same with a cold beer. Just sayin'. 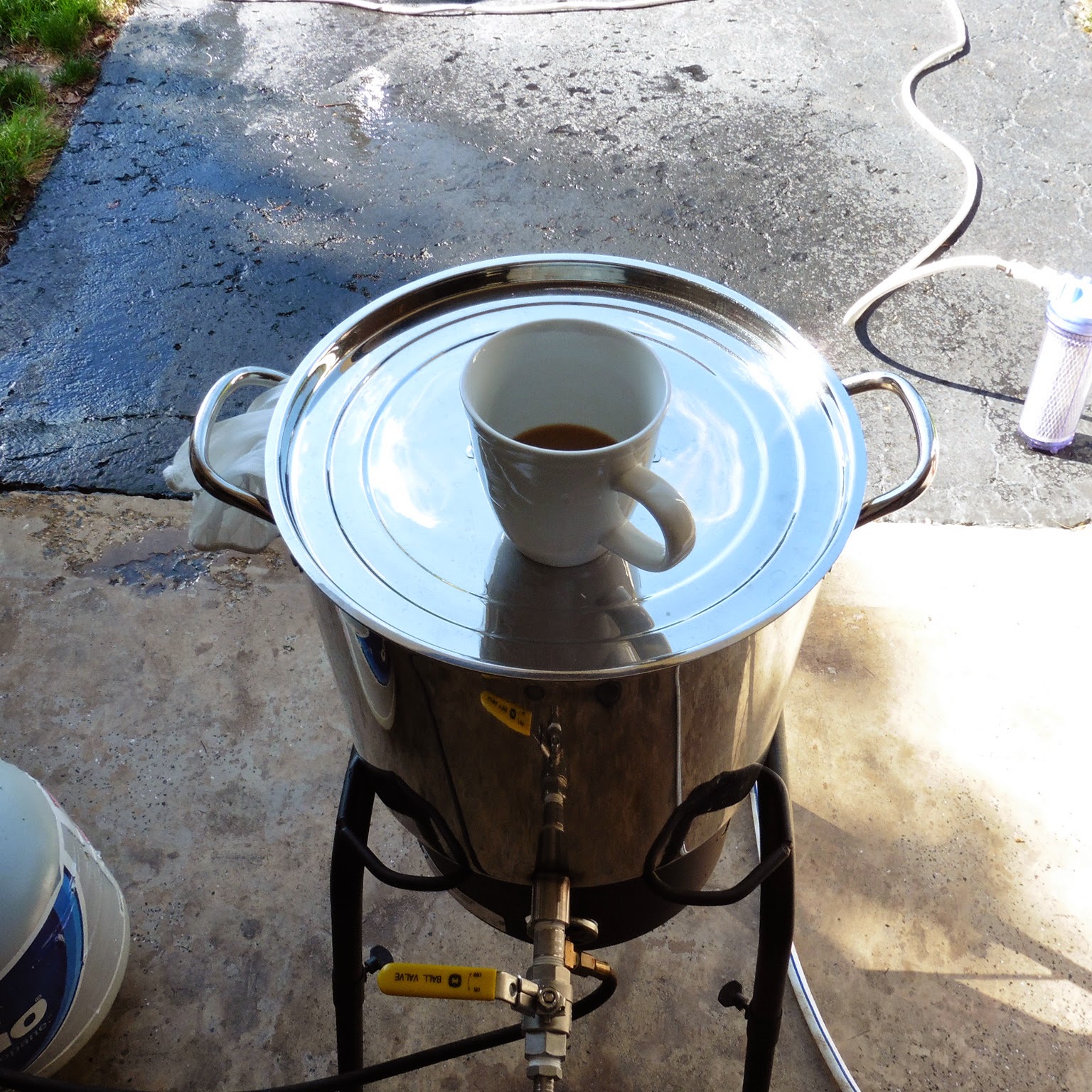 The directions call for a three gallon grain steep and subsequent boil. To avoid darkening the wort and creating harsh flavors check out the Late Malt Addition technique we use in our "Eight Steps To Excellence" directions. Here's a link for reference. Although the ingredients may differ the methodology is largely the same across recipes. 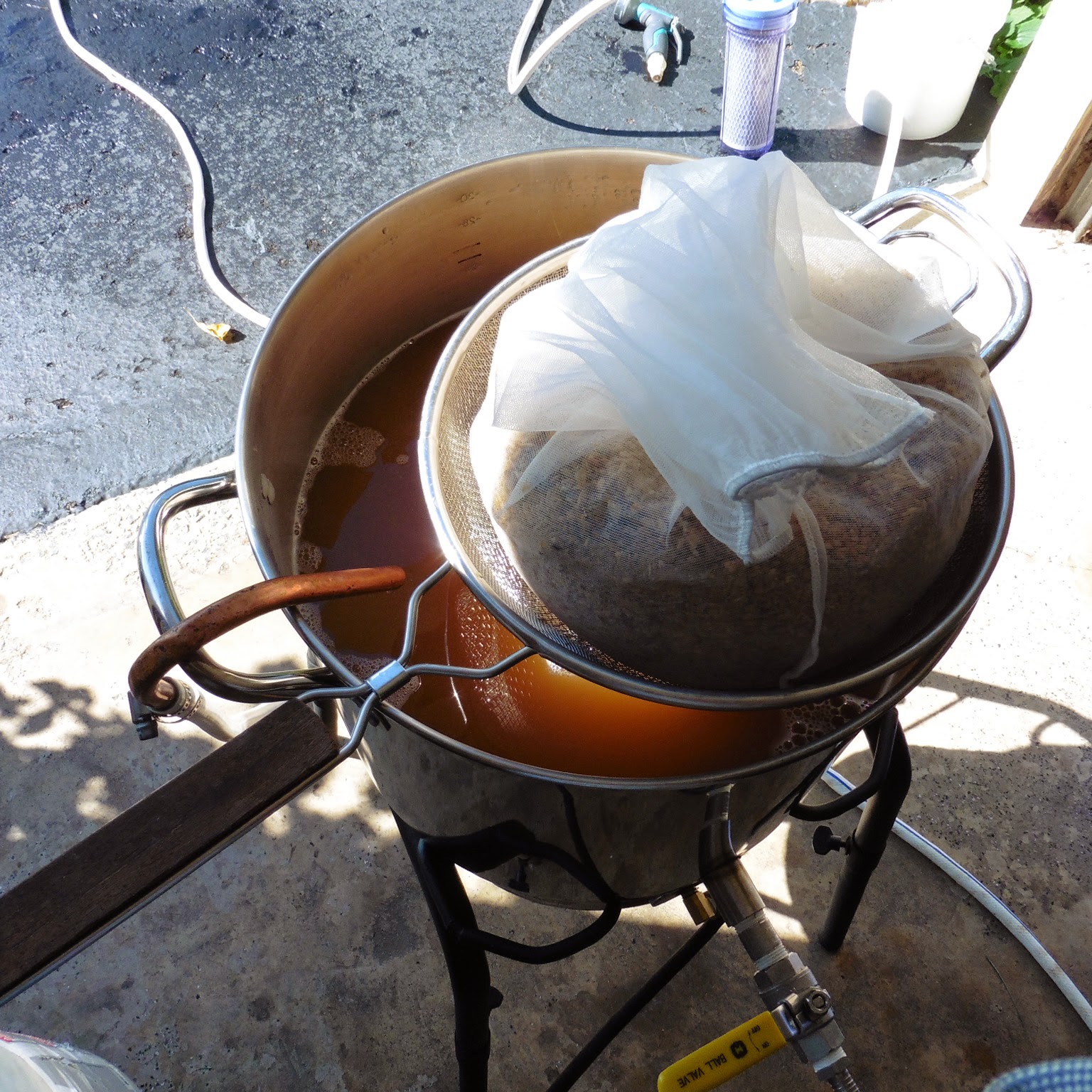 Another tip: After steeping and sparging it's a good idea to rinse your strainer and reusable bag in water followed by a blast of Star San. Left to air dry, you won't have any problems with molding. 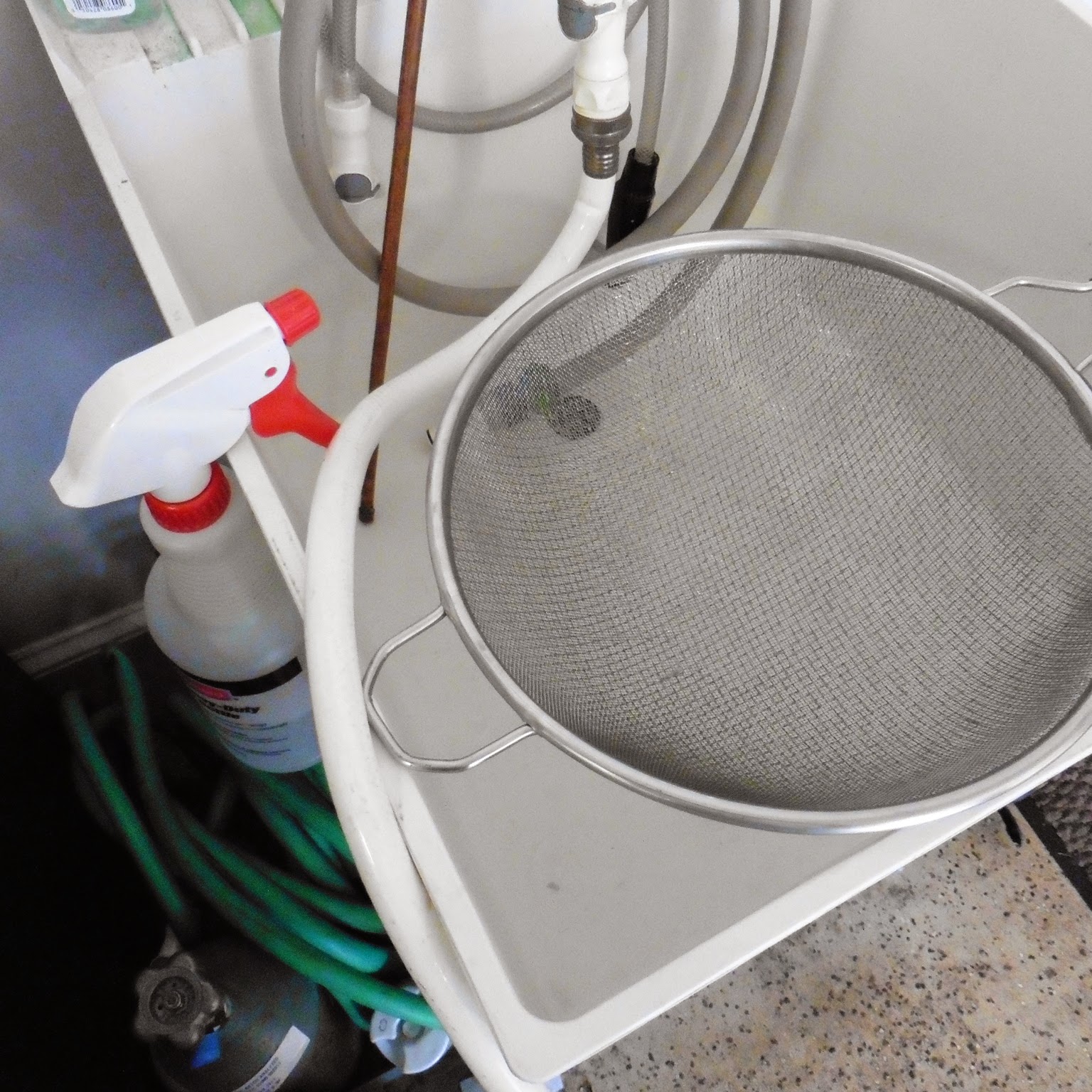 I like to boil with as much water as possible for the best quality of finished beer. In my case this means 6 gallons to start so the old ice-bath is out. After use my trusty immersion wort chiller gets a quick scrub down and blast of sani spray too. I call this step  #You'reAlmostDoneSoGetABeer time. 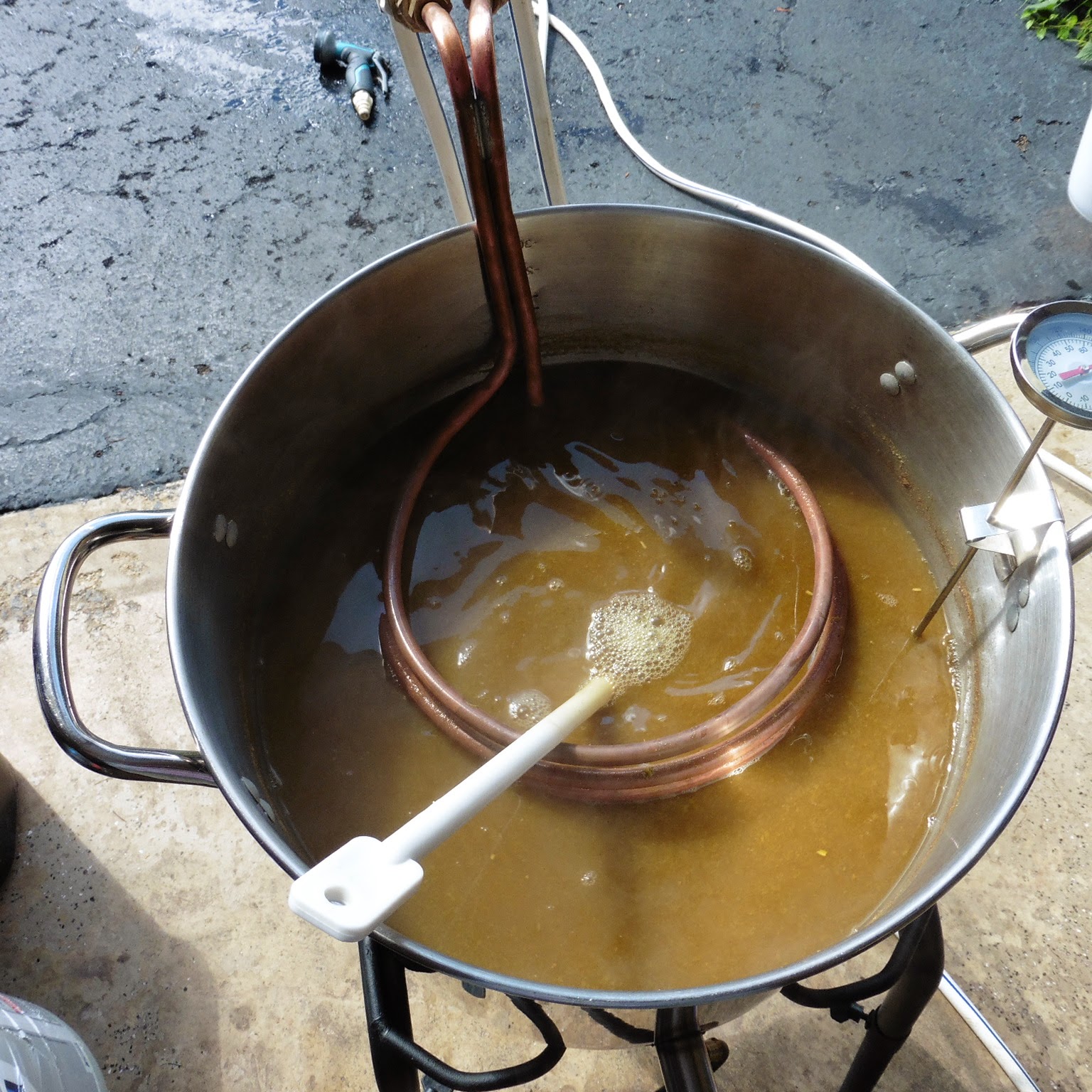 As a brewer I'm not only sensitive to water quality but also water usage. There are a lot of rain barrels in my neighborhood but mine might be the only one inside a garage, err... home brewery. The amount of water needed to cool wort can be substantial so I recapture as much as I can for our plants, etc. (This barrel is large enough to bathe in but I'm not sure the neighbors would appreciate that.) 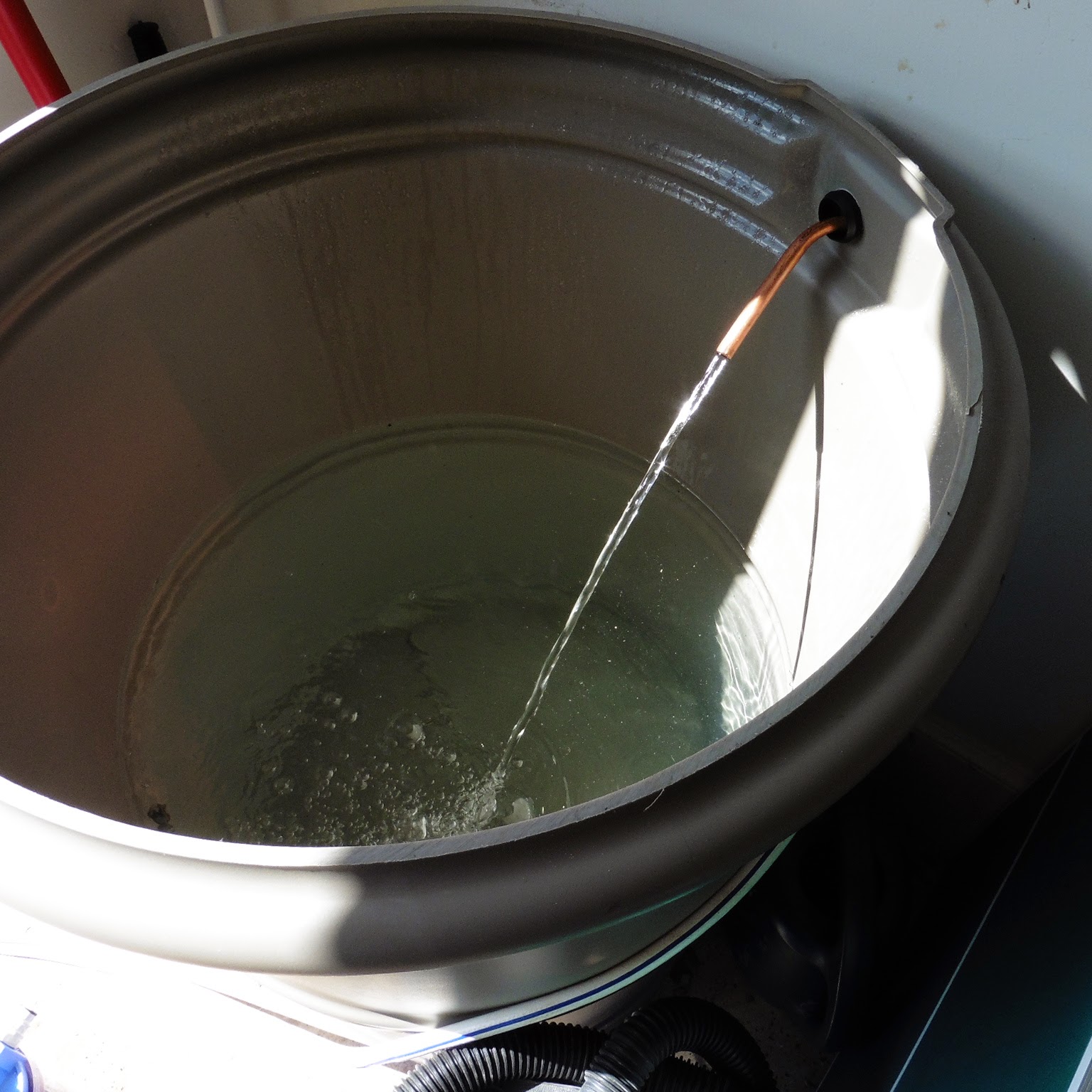 That's it for this brew session. It would have been nice if the hop varieties were identified but I'm guessing that was omitted at the request of the brewery. The vapor from the First Wort addition smelled like apricots so I'm guessing that was straight Palisade. The other additions were blends.

Next week: time to transfer the beer to a secondary fermenter and add the dry hops. Considering the large amount of vegetal matter I'm going to let the beer settle under cold for an extra week or so. In the past with similarly hopped beers I've moved to the keg too soon only to have the liquid out tube clog with hop particles. Talk about suck factor -- running out of beer is bad but being unable to pour a full keg is much worse!